National Endowment for the Arts Appropriations

In 2017, the House of Representatives proposed $145 million for the National Endowment for the Arts and National Endowment for the Humanities for FY2018. Although this was a proposed cut from current funding levels, the House proposal squarely rejected the termination request from the Trump administration—an action which Americans for the Arts worked toward for months. The House of Representatives Committee on Appropriations released a summary of the approved 2017 budget, which included good news for the arts and culture sector: the budget allocated $150 million for the NEA, which marks a $2 million increase from 2016.

Award-winning composer, lyricist, and performer Lin-Manuel Miranda met with 35 members of Congress when he was in Washington, D.C. in September. Americans for the Arts helped organize key meetings with U.S. Senators during his visit which was featured in People Magazine. All told, Americans for the Arts continues to hit new advocacy records: Grassroots advocates sent over 186,000 messages in 2017 to their elected representatives in support of Americans for the Arts’ #SavetheNEA campaign, reaching every congressional office (House and Senate).

Americans for the Arts launched the Arts Mobilization Center — a hub of information and resources for arts advocates. It contains important that we have distributed, policy response statements Americans for the Arts has issued on key and timely topics, useful news articles, and important action steps for you to take now and in the months to come.

Thanks to dual-lobbying successes retaining the authorization for the federal arts education program and $27 million in annual funding (made possible by Americans for the Arts and other national advocacy partners), the U.S. Department of Education announced 20 professional development grants for arts education. The grants, awarded to school districts to improve their arts integration program in coordination with local arts partners, totaled $27 million for a 4-year cycle. The program’s cohort began in 2002 and has provided over $450 million in arts education awards. Americans for the Arts captured the program’s reach in the publication, A Decade of Federal Arts Education Funding. 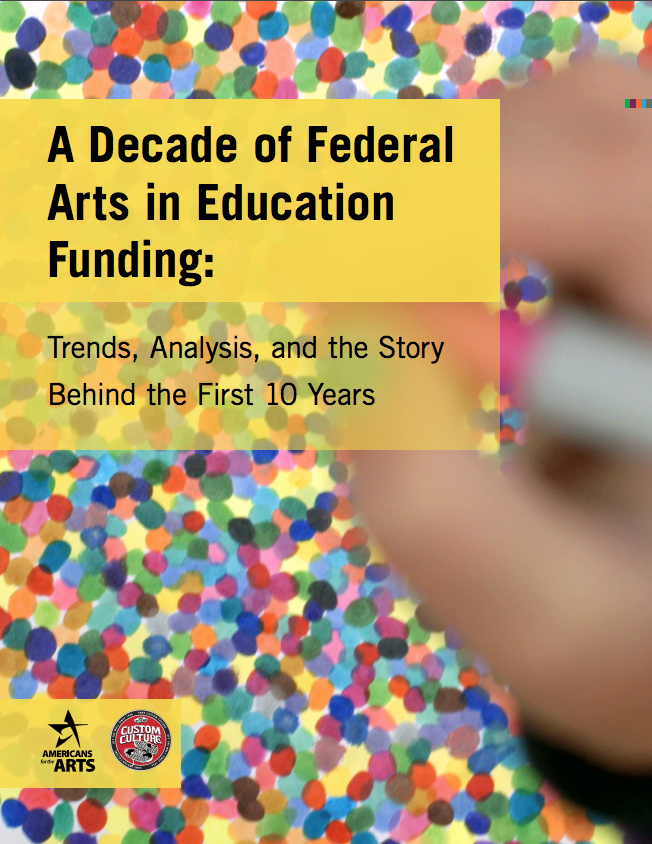 Preparing for Tax Reform Possibilities in 2018

2017 marked the 100th anniversary of the charitable contribution deduction. This legislation was enacted by Congress to promote charitable giving and empower individuals to give of their personal income for public benefit. As the Trump Administration and Congress made contours of tax reform debate more public, Americans for the Arts published a statement to oppose policies that remove incentives for charitable giving or limit the full scope and value of the tax deduction—for all forms of charitable gifts (arts, religion, education, environment, etc.). We will continue to work and ensure that any change made in tax reform does no less than encourage even more giving by more Americans. With that in mind, Americans for the Arts joined the Independent Sector’s “Giving100” campaign that seeks to allow charitable tax deductions for all Americans, regardless of whether you itemize or don’t on your annual taxes.

Since the passage of the new K-12 education law, Every Student Succeeds Act, Americans for the Arts has tracked its implementation. The U.S. Department of Education released final regulations pertaining to state accountability plans and included “arts” in the list of well-rounded subjects. Americans for the Arts called for this inclusion, along with 51 organizations.

In order to support our state advocacy members and arts education leaders, a growing set of tools are provided on an ESSA resource page.