Americans for the Arts and its affiliated 501(c)(4) organization, the Arts Action Fund, both work to ensure the arts and arts education are represented as important policy issues legislatively and on the campaign trail.

In 2016, the Arts Action Fund launched a series of advocacy training sessions in key primary states. Given the massive amount of political attention on early primary states like Iowa and New Hampshire, the Action Fund hosted trainings on how to best talk to candidates about the arts and how to educate them about the positive impacts of the arts.

On August 14, 2015, Arts Action Fund, in partnership with the Iowa Alliance for Arts Education, the Iowa Arts Council, Bravo Greater Des Moines, National Association of Music Merchants, and The U.S. Conference of Mayors, produced its first-ever, day-long Iowa Arts Advocacy Caucus training in Des Moines. More than 200 arts advocates attended the conference, which was aimed at empowering and training Iowans to be more effective and active grassroots advocates for the arts whether they’re at a town hall meeting, a presidential caucus, or a Board of Education hearing. In New Hampshire, the Arts Action Fund hired two political strategists and partnered with the New Hampshire Citizens for the Arts to train more than 50 grassroots arts advocates to be highly effective in engaging presidential candidates with the goal of ensuring that the next President of the United States understands the value of investing in the arts. 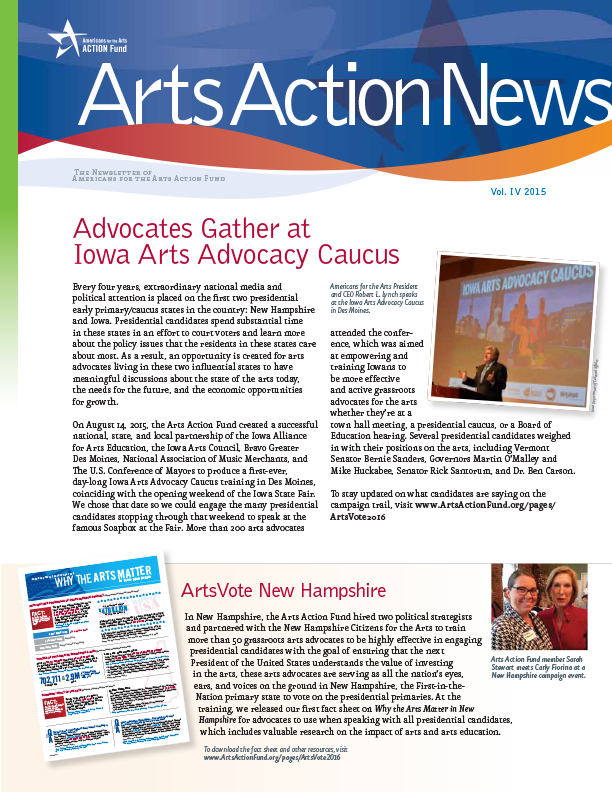 The summer of 2016 saw the Republication National Convention in Cleveland and the Democratic National Convention in Philadelphia. The Arts Action Fund hosted ArtsSpeak events at both in order to bring visibility to the arts and arts education. Our Artists Committee Members Ben Vereen and Ben Folds, along with other political allies like STEAM Caucus Co-Chair Rep. Suzanne Bonamici (D-OR), hosted lively panel discussions and visited with attendees throughout both Conventions to help spread our message.

Donna Brazile at 2016 Americans for the Arts Convention

Shortly before the political conventions in late summer 2016, attendees of our 2016 Annual Convention were inspired by Donna Brazile, who at the time was interim head of the Democratic National Committee.

“Art has always been involved in the political process. It impacts elections, topples totalitarians, sways public opinion and transforms society. We need only look at Harriet Beecher Stowe’s Uncle Tom’s Cabin, the election of 1860 and the Civil War. Or Upton Sinclair’s The Jungle and the plight of immigrants, the exploitation of workers, and the need for food safety inspection. Or Rachel Carson’s Silent Spring and the threats to our environment, chemical or otherwise. These issues are still with us, and we need new artists to raise our awareness, strike our conscience, and rouse us to action.”

Brazile left the arts community with a charge to be at the table, to keep making our art, to be bold, and to vote.

During the 2016 Annual Convention, we also hosted a session titled Everything You Need to Be a Top Arts Advocate This Election Year. 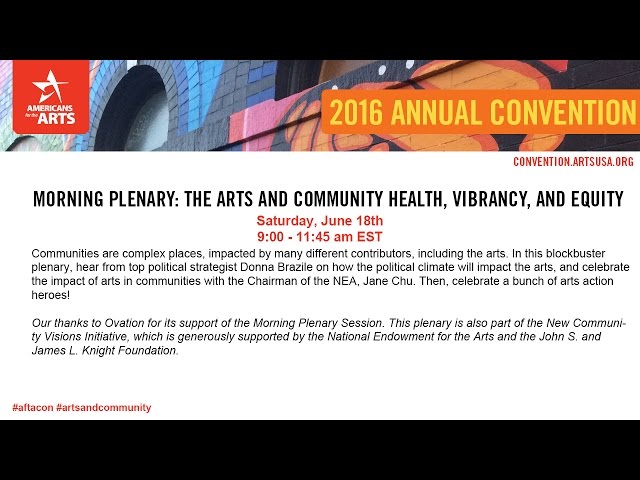 Following the results of the presidential election, President and CEO Robert L. Lynch released a statement calling for hope, resilience, and unity in America.

“The historic election of Donald Trump as the 45th President of the United States brings some uncertainty in terms of federal support for the arts. President-Elect Trump, in answering questions co-developed by The Washington Post and Americans for the Arts, deferred to Congress on supporting increased federal funding of the National Endowment for the Arts and other federal funding for culture in general. He also deferred to state and local school districts on maintaining or increasing support for arts education funding. While he does express appreciation for arts education and the arts in his own life, specific policy positions are still unknown or undeveloped.”